Tucked away but still close to all major amenities 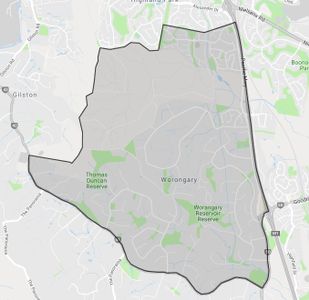 It is surrounded by the suburbs of Mudgeeraba, Tallai, Merrimac, Highland Park, Gilston and Carrara.

There are approximately 2,051 houses and 148 units in Worongary which sits in the Gold Coast hinterland west of the M1 Motorway, immediately north of Mudgeeraba and 10 km west of Mermaid Beach.

Offering both residential blocks and acreage properties, it offers a friendly, primarily residential neighbourhood with great local schools and the bonus of being so close to all major facilities and access to the M1 Motorway north & south, yet still tucked away enough to escape the hustle and bustle of city life.

The suburb is well served by Worongary Town Centre Located on Mudgeeraba Road, Worongary, just off the M1.  It has a Caltex Service Station, Coles Supermarket, a gym, cafes and restaurants and speciality stores.  It even has a drive-through Zarraffas!

Worongary was a railway stopping place on the South Coast railway line (1903). This photo shows the construction of the railway line in Worongary in 1901.

It was first subdivided for housing in 1979 and the local primary school was opened in 1993.

It is believed that Worongary (or native name: Whorrongary) was named in imitation of the sound made in flight by the Little Topknot Pigeon found in the area.

For a full history of the region see beautiful, historical Mudgeeraba

If you would like to link up with local residents and local business operators, why not join one of the local facebook groups:

On the market in worongary