Lush green, as far as the eye can see 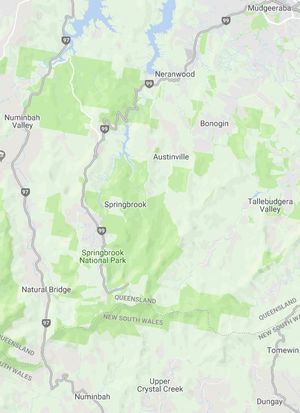 where locals respect each others' privacy and love the convenience of living outside the hustle bustle of city life but still close enough to access all conveniences.

The suburb of Neranwood has an approximate area of 320 hectares or around 3.2 square kilometres (791 acres) and had a recorded population of 67 people (at the 2016 Australian Census).

It is surrounded by the suburbs or Mudgeeraba (about 8 kilometres away), Bonogin, Austinville & Springbrook.

Neranwood has 41 residences offering acreage lifestyle with an outlook over the green hills and valleys of Mudgeeraba with the feeling that you are a million miles away.

The name Neranwood is a contraction of the name of the Nerang Hardwood Company which established a sawmill in the area in 1923 near where Polly’s Country Kitchen now sits on Gold Coast-Springbrook Road. 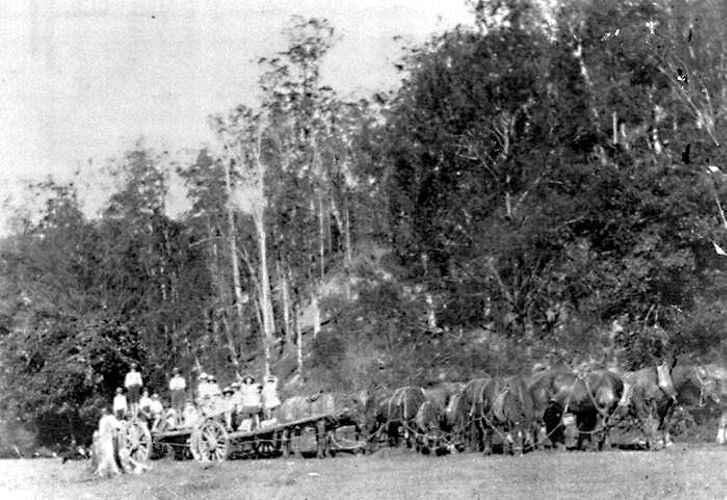 The sawmill built a private tramway from Neranwood to Mudgeeraba to transport the timber from the sawmill to the railway siding at Mudgeeraba. It had two locomotives called Alison and Kathleen. A telephone and telegraph office was established in 1924. Workers huts and a provisional school were also built. (This shot shows children from Neranwood State School in 1924).  Unfortunately, due to tough economic times, the sawmill and tramway closed in 1928 as did the school. History tells us that local families removed and used the tramway sleepers for firewood.

In the late 1970’s, 49 properties in the valley were resumed by the government for the Hinze Dam project. 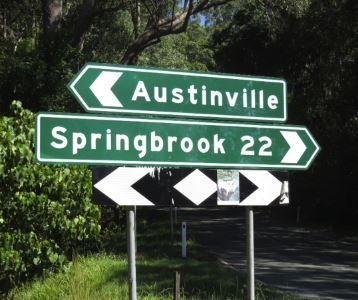 The suburb of Austinville has an approximate area of 2100 hectares or around 21 square kilometres (5189 acres) and had a recorded population of 356 (as at the 2016 Australian Census).

It is surrounded by the suburbs of Mudgeeraba, Bonogin, Neranwood, Numinbah Valley & Springbrook.

Austinville has only 131 dwellings and offers a lush rural acreage lifestyle surrounded by pristine rainforest with the feeling of tucked away, yet so close to all the facilities on offer in Mudgeeraba.

And if you're looking for a unique venue for an enchanting wedding, conference or event, you'll find it here in Austinville.  The exceptional Austinvilla Estate offers retreat-style accommodation & gourmet catering in a spectacular hinterland setting of 111 acres of native flora and fauna.  And it is conveniently located just 7 minutes' drive from the centre of Mudgeeraba. Find out more here.

Austinville was established by the Queensland Government in 1934 in an effort to resettle unemployed people on the land. It was named after the Under Secretary for the Department of Labour and Industry, Mr W.H. Austin, who was responsible for a number of Banana Settlement schemes in Queensland.

in June 1933, forty men arrived from Brisbane to create access roads and to clear and subdivide the land into blocks for growing bananas, tobacco and cotton. 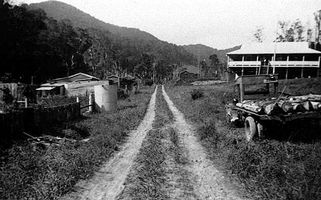 Approximately 50 small homes and a school, which opened in mid-1934 sat beside the gravel track into Austinville Valley. Behind the homes, along the valley floor, flowed Mudgeeraba Creek which provided the perfect environment for approximately 200 acres of land which was dedicated to growing bananas.

By 1939, after the worst effects of the Depression had passed, most of the families (around 200 people) had left Austinville. 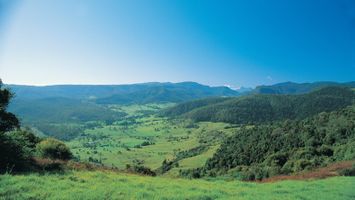 The suburb of Numinbah Valley has an approximate area of 5800 hectares or around 58 square kilometres (14332 acres) and had a recorded population of 218 people (at the 2016 Australia Census).

The area is characterised by cleared valley floors with some grazing land stretching up into the steep, sharply defined sides of the valley and is the major water supply catchment of the Gold Coast. The Nerang-Murwillumbah road runs along the valley floor adjacent to the tree-lined banks of the Nerang River and its tributary creeks.  The cliffs, narrow ridges, forested slopes and open farmlands combine to create one of the most scenic rural areas in the Gold Coast Hinterland.

It is surrounded by the suburbs of Natural Bridge, Springbrook, Austinville, Neranwood, Advancetown and Beechmont.

Numinbah Valley is 19 kilometres from Springbrook and has 59 residences offers lush green acreage living,  It is 25 minutes drive to Nerang and just 40 minutes from the coast.  Here you and your family can live with fresh air and space around you surrounded by horse riding trails and the Natural Bridge National Park.

Many properties offer sweeping views of the McPherson Ranges and the Nerang River.  With some, you can even watch the sunrise over Mount Warning - the first place on mainland Australia to receive the sun's rays!

For families, there is a local country primary school (Numinbah Valley State School) and a school bus service to Nerang.

Settlement of the area is associated with timber getters moving up from the Tweed and Richmond Rivers in search of the valuable red cedar trees in the 1870s. The timber resources of the area supported the economy of the local farming families and supplied timber for a number of local and regional saws mills well into the 20th century. 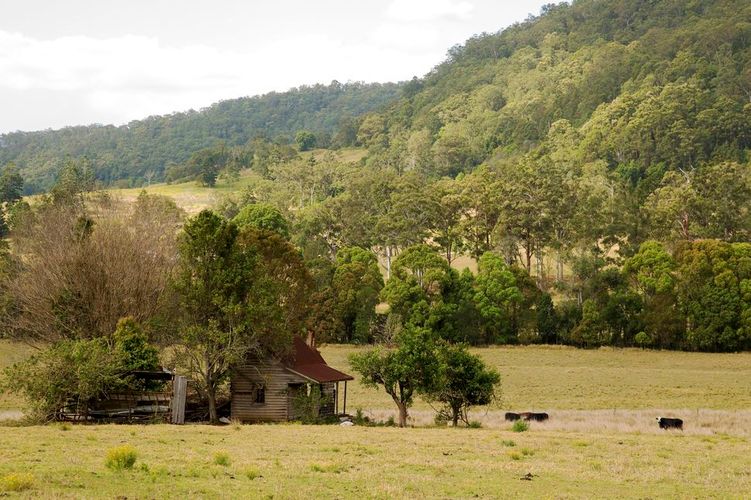 Dairies, banana plantations, beef production, and later tourism, have played a significant role in the economic history of the area.  The hut shown in this photograph is believed to have been built by dairy farmer, Frank Nixon, the first European settler in the Valley in the 1870's.

The suburb of Numinbah has an approximate area of 2900 hectares or around 29 square kilometres (7166 acres) and had a recorded population of 129 people (at the 2016 Australia Census).

It is separated from Numinbah Valley by Natural Bridge and is surrounded by the suburbs of Upper Crystal Creek, Springbrook, Chillingham, Hopkins Creek, Limpinwood.

There are 62 dwellings in a lush green acreage environment on the NSW side of the Queensland border, 21 kilometres south of Numinbah Valley and 21 kilometres north-west of Murwillumbah. 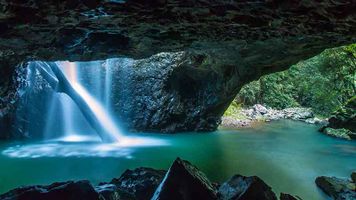 The suburb of Natural Bridge has an approximate area of 4200 hectares or around 42 square kilometres ( 10378 acres) and had a recorded population of 108 people (at the 2016 Australia Census).

Natural Bridge is in the western part of Springbrook National Park, part of the Gondwana Rainforests of Australia World Heritage Area.  It is surrounded by the suburbs of Springbrook, Numinbah and Numinbah Valley and Binna Burra and Beechmont to the north.

Natural Bridge has 52 residences offering an acreage lifestyle with an outlook over the picturesque green hills and valleys of Numinbah Valley away from the pressures of city living.

It offers a rural environment with rich volcanic soil and friendly locals. There is a local country primary school (Numinbah Valley State School) and a school bus service to Nerang.

How Natural Bridge was formed:

The rainforest springs and short tributary creeks such as Cave Creek form the headwaters of the Nerang River.  The Natural Bridge area takes its name from an ancient geological phenomenon associated with one of these creeks and through the process of time, a deep cave formed behind a waterfall on Cave Creek.

Upstream of the falls, a pool was scoured by tumbling water and rocks until the waters partially broke through the basalt rock of the creek bed to flow into the large cave below. This diversion of the stream created a perfect arch or bridge in the rock above. The creek flows dramatically into the cave pool and then continues on its course to join downstream with the Nerang River.

It is easily accessible from the Nerang-Murwillumbah Road car park and offers a short one-kilometre subtropical circuit which descends through ancient Gondwana rainforest to the Natural Bridge rock arch. At night join a guided nocturnal tour to see the resident colony of protected glow-worms and microbats. On summer nights, also see luminous fungi and fireflies.

Cave Creek in the Natural Bridge section is a restricted access area. Access to the creek bank and swimming in the creek and within the cave is prohibited.

It is documented that two timber getters, Alexander (Sandy) Duncan and Din Guinea, were the first Europeans to sight the Natural Bridge. They were cutting timber in the rainforest just above what was then an unnamed stream. Sandy had reportedly gone down to the creek for water to boil the billy when he came upon the bridge and cave. From then on the local timber getters and later settlers referred to the place as the Natural Bridge.

Links to other suburbs