The traditional custodians of the land, the Yugambeh people can be traced back thousands of years as the first human inhabitants of the Springbrook Plateau.  Many of Springbrook’s lookouts, waterfalls and picnic areas still bear their original indigenous names.

Difficult access and the inclusion of the area into a vast timber reserve had deterred white settlement until as late as 1906.  That year, Cobargo businessman, T.J.Tarlington organised a group of settlers – a  syndicate of farmers, known as "the Springwood Group" from around the districts of the south coast of NSW to clear the land.

They travelled by coastal steamer from Bermagui on the south coast of NSW to Brisbane, Queensland.  From Brisbane, they travelled by train down to Nerang and then up the Springbrook Plateau by a rough bush track. The track had only recently been hacked out of the ridge by the prisoners of Brisbane’s Boggo Road Jail.

Prior to their arrival and the survey of the plateau, only a few timbermen and walking parties from Numinbah Valley had ventured here.

Some of the group made their temporary homes at surveyor A. H. Burbanks's camp, appropriately named Camp Creek.

A few of the party travelled up a stream which they called Purling Brook until they came to an area named Cork Flat, named after two selectors named Herrick and Lionel Cork.

That same year (1906), the Queensland Government was encouraged to open up timber reserves in the Numinbah Valley and on Numinbah Plateau (as Springbrook was then known) for dairying.

Springbrook land was made available under a land ballot for farming. Conditional on the offer of freehold land was the requirement of five years personal residence and certain improvements within a specified time-frame.

offered according to their fertility and location at a cost of £2 per acre for first class and £1 per acre for second class blocks. The main farming undertaken was dairying.

Dwellings constructed by the early settlers consisted mainly of slab huts with stringybark roofing using timber from the properties.

Supplies had to be bought in Nerang and were carried by horse-drawn transport to the junction of Pine Creek Road and the Numinbah Valley Road. From there it all had to be carried to its destination on their backs - giving an understanding of how the last steep pitch of the road known as “Heartbreak Hill” was named!

History shows that Springbrook – the “Land of the Tall Timber” by the timber-getters, was originally called Springwood, but as mail was continually 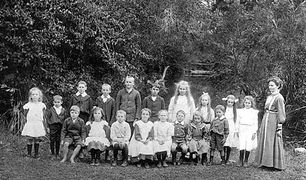 sent to a place of the same name in the Blue Mountains of NSW, the name was changed to Springbrook in 1907.

The Springbrook primary school was opened in 1911 and in 1914 the track to Mudgeeraba was upgraded for wheeled traffic.

An improved road with lower gradients was built during 1925-28, in time for the growth in tourism and guesthouse accommodation on the mountain and enabling a bus to transport visitors from Southport to Queensland’s ‘premier mountain resort’. The first guesthouse, “Rudders” opened in 1925 and by the end of the 1930’s, there were seven on offer along with cafes and self-contained accommodation.

By the 1970’s, the estimated population 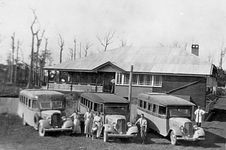 dropped to just 50 people as dairying declined.  The school was closed in 1971 but a new school was built in 1984 following a revival in interest in Springbrook led by retirees, alternative life-stylers and day trippers.

To find out more about the local history of Springbrook, pick up a copy of “Springbrook – Where the Clouds Touch the Earth”, by Pamela Hall.  Available in Springbrook from The Fudge Shop and Dancing Waters Café.

For more history about the surrounding areas of Neranwood, Austinville, Numinbah Valley & Natural Bridge, click here and for a history of the region see beautiful, historical Mudgeeraba.